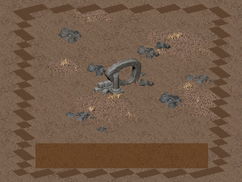 Traveling back in time

The City on the Edge of Forever

The Guardian of Forever is a special encounter in Fallout 2. The Guardian is a giant, ancient-looking time portal which allows the Chosen One to travel back in time before the start of Fallout to break the water chip in Vault 13. After having broken the water chip, a notice reads "the Vault has maybe 100-150 days left of water. This comforts you for some reason."

In the vault, the Chosen One can only browse the overseer's command center. Although linear, it provides palpable benefits to the player character. Loot includes Mentats and a unique energy weapon, the Solar Scorcher. Returning is impossible after leaving.

The name of the encounter is a reference to the Star Trek episode "The City on the Edge of Forever", in which a portal, named the "Guardian of Forever," teleported Kirk and Spock to New York in the 1920s. 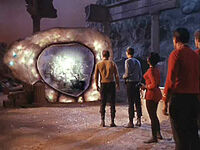 The Guardian of Forever in Star Trek
Polski Русский 中文
Community content is available under CC-BY-SA unless otherwise noted.
Advertisement