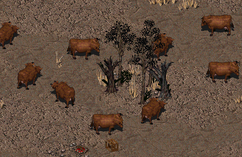 “I don't have that kind of money, and if I did, I wouldn't give it to a little trickster like you.”— Chosen One, after failing the task

Guard brahmin herd for Grisham is an unmarked quest in Fallout 2.

In Modoc, talk to Grisham (Davin and Miria's father, Biff's brother) about his slaughterhouse. When exiting the conversation, he'll ask if the Chosen One wants a job. Agree to it, and he'll send them to the brahmin pasture. The task at hand is to keep the wild dogs from killing his herd.

Moving to the pasture, one should run north immediately to put themselves between the brahmin and the marauding dogs. There are 10 dogs total and they spawn semi-randomly, but always from the north side of the screen. Each brahmin they take down lessens the reward, so kill them as quickly as possible. Typically after a few have gone down, the rest become fully hostile, so be prepared. They can be nasty due to their high Sequence if not prepared.

When all of the dogs have been killed, return to Grisham and he'll pay out according to how many brahmin were saved. If for some reason all the brahmin were killed, Grisham will charge the Chosen One $1500 instead. This leads to an unfixed bug, where it is impossible to actually pay him, and have to deal with all sorts of game-related nastiness.

Sometimes even if all dogs are killed and brahmin are saved, the game might think that the brahmin are all dead, failing the quest once leaving the area. [verified]

Retrieved from "https://fallout.fandom.com/wiki/Guard_brahmin_herd_for_Grisham?oldid=2795017"
Community content is available under CC-BY-SA unless otherwise noted.