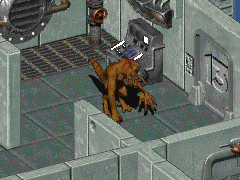 “Well, deathclaws are dangerous by nature and great care must be taken when encountering them in the wild. However, I am certain that you have noticed that we are an exception. My pack poses no threat to you or your human communities. We have evolved beyond our base cousins and wish simply to be left alone.”

Gruthar is the leader of the intelligent deathclaws of Vault 13 in 2241.

By far the most impressive and strongest among his pack[1], Gruthar is the alpha male and leader. He possesses an uncanny intellect and a deep life philosophy, respecting human life and trying to minimize the impact he and his pack make upon their unknowing neighbors.

Despite being bred by the Enclave forces, he harbored hatred and dislike for them and has to cope with his conscience, as he takes complete responsibility for his pack's part in the abduction of the Vault inhabitants. Goris, a very intelligent albino deathclaw, is his son, privy to his father's doubts and internal struggles. He hopes to be as smart as his father one day.

The G.E.C.K. transaction triggers the massacre of Vault 13 inhabitants two weeks after the exchange takes place. This can be potentially avoided if the Chosen One kills Dr. Schreber and fixes the Vault computer. This is bugged, however, thus leaving his true fate unknown.

Being the leader of the Vault 13 deathclaws, he is the first one to speak to the Chosen One, asking them to not disturb the peace of the Vault. Gruthar may or may not allow the Chosen One to enter the vault. To be allowed to enter, they must meet one of the following requirements:

Gruthar appears in Fallout 2 and is mentioned in the Fallout Bible.

Gruthar, moments before death
Add a photo to this gallery

Retrieved from "https://fallout.fandom.com/wiki/Gruthar?oldid=3299506"
Community content is available under CC-BY-SA unless otherwise noted.