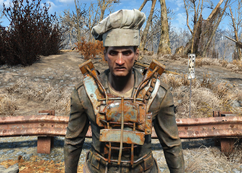 Gruel is a randomly encountered named raider living in the Commonwealth in 2287.

Gruel is a well-armed raider chef traveling across the Commonwealth looking for ingredients that he can use in his recipes. Upon death, his list can be looted from his corpse; this list contains high quality meats, deathclaw eggs, beer and a cup of glowing ghoul blood, which he appears to be amused by.

Unlike most raiders, Gruel does not have any voice lines, nor does he have an associated voice type.

Gruel appears only in Fallout 4.

Retrieved from "https://fallout.fandom.com/wiki/Gruel?oldid=3351551"
Community content is available under CC-BY-SA unless otherwise noted.