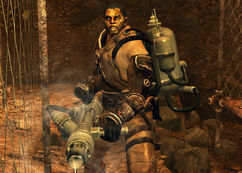 “They're a couple of mean bastards. Hell, rumor has it that they're half way to trog as it is.”— Faydra, describing John and his brother.

Grudd Bear is an arena fighter in the Pitt in 2277.

Masters of "claw and paw" combat, John and Grudd Bear are man-mountains with a vicious winning streak in the arena. Thanks to an addiction to RadAway, they are almost impervious to the arena's traps, and the siblings have developed an impressive plan of attack: Grudd holds back, scorching the escaping foe with flamer fire while his brother rips the victim apart with a deathclaw gauntlet.[1]

During the Scourge, his other brother Greg was taken in by the Brotherhood. However, he and John were left behind due to being "too wild and mean".[2]

Grudd is the brother of John Bear and Greg Bear.

Faydra, coordinator of events in the Hole, comments on how the Bear brothers' ferocity leads people to believe that they are half trog.

Grudd Bear appears only in the Fallout 3 add-on The Pitt.

Retrieved from "https://fallout.fandom.com/wiki/Grudd_Bear?oldid=3439798"
Community content is available under CC-BY-SA unless otherwise noted.