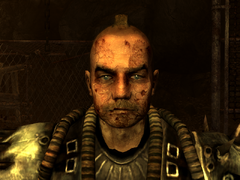 Gruber without his helmet

“Man, you killed the fuck out of Gruber!”— Faydra

Gruber is a released slave and the champion of the Hole by 2277.

A mysterious man in a motorcycle helmet, Gruber is consistently ranked as the number one arena fighter in the whole of the Pitt. A veteran of one-on-one combat, Gruber concentrates solely on furthering his career and meticulously cleaning his Infiltrator rifle.[1]

Gruber was once a Pitt slave. After winning his freedom fighting in the Hole, he continued to fight for the glory of it.

At one point in development, he was to fight alongside raider fighters.

Gruber appears only in the Fallout 3 add-on The Pitt.

Retrieved from "https://fallout.fandom.com/wiki/Gruber?oldid=3439775"
Community content is available under CC-BY-SA unless otherwise noted.