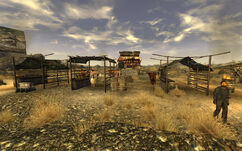 The Grub n' Gulp rest stop is a location in the Mojave Wasteland in 2281. It is located north of REPCONN headquarters along Highway 95. It is run by Lupe and Fitz, the latter of whom tells the Courier that most of their customers are NCR patrols or travelers heading to or leaving New Vegas.[1]

The rest stop is comprised of three makeshift stalls. The lefthand stall appears to be used for smithing. Lupe sells water in the middle, and Fitz sells food in the righthand stall. Behind the stalls is an inaccessible shack and three brahmin are enclosed in a corral. There is a campfire for crafting and four makeshift beds that are unowned to the right of the shack. An iguana-on-a-stick and squirrel-on-a-stick are found on the sides of the campfire. To the left of the shack is a picnic area surrounding a barrel fire.

Retrieved from "https://fallout.fandom.com/wiki/Grub_n%27_Gulp_rest_stop?oldid=3335370"
Community content is available under CC-BY-SA unless otherwise noted.