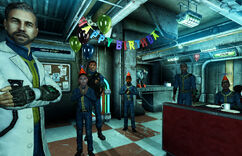 Growing Up Fast is a Fallout 3 quest. As part of this quest, the player character gains the Vault 101 Citizenship Award which is an achievement for the Xbox 360 and PC, and a bronze trophy on the PlayStation 3. It is guaranteed to be the first earned achievement/trophy in the game.

Have a present[edit | edit source]

This quest begins immediately after the Baby Steps quest, though it occurs in 2268, at the player character's 10th birthday party. They will be congratulated and be given a Pip-Boy 3000.

The Lone Wanderer is to speak with the guests to advance the plot. There are really only two that must be spoken with, however. Amata will more than likely be the first to speak with them, with three different dialogue options. Each option except "Um, a date with Christine Kendall/Freddie Gomez" will result in her giving the player character a "Grognak the Barbarian issue #14." comic. Old Lady Palmer will give a sweetroll. Optionally, Stanley, the one responsible for setting the Wanderer up with the Pip-Boy 3000, can also be spoken to for a kid's baseball cap.

After Old Lady Palmer has been spoken with, Andy, a Mister Handy robot, will try to cut the cake, but will accidentally destroy it instead. This will agitate Butch DeLoria, and he will demand the Lone Wanderer's sweetroll as he is hungry. Various dialogue options exist at this point. Most of the time, Butch will end up attacking the Lone Wanderer (no way to fight back), particularly if the sweetroll is not given. Officer Gomez will eventually break up the fight. The situation may be explained to him if this happens. One scenario to note: if the sweetroll was eaten, and the Wanderer calmly explains this to him, he will just sit back down. Also, if the sweetroll was dropped, Butch will sit back down and the sweetroll can be retrieved from where it was dropped. Regardless of what goes down, Amata will approach the Lone Wanderer to see what Butch's outburst was about, and Dad will also ask what happened if he is spoken to.

Shortly after this, Dad will get up and go to the intercom, where he converses with Jonas over it. He will at this point direct the Lone Wanderer to go down to the reactor room for a surprise he and Jonas have been working on.

Armed and in charge[edit | edit source]

The latest objective is to meet Jonas in the reactor room. Head out the door Dad just opened and turn right; Beatrice will more than likely speak with Wanderer on the way there. She will give them a poem which can be read in the "Notes" section of the Pip-Boy 3000.

Turn left at the "reactor" sign head down the hall and turn right. Go down the stairs and enter the room. Talk to Jonas, and he'll direct you to see Dad, who is just coming down the stairs. When he speaks to you, he'll give you a BB gun. A new objective pops up at this point. Head through the nearby door, and shoot all three targets with the BB gun.

After each target has been shot once, a radroach will come wandering into the area. The player character is tasked to kill it with their new BB gun. After this, Dad wants to capture the moment, and asks Jonas to take a picture. Simply stand next to him at this point to complete the quest. After the "Six Years Later" transition, the Future Imperfect quest will begin at the Lone Wanderer's age of 16.

Overseer Almodovar giving you your Pip-Boy 3000

"I'm hungry, and that stupid robot destroyed the cake!"
Add a photo to this gallery
Retrieved from "https://fallout.fandom.com/wiki/Growing_Up_Fast?oldid=3258113"
Community content is available under CC-BY-SA unless otherwise noted.
... more about "Growing Up Fast"
RDF feed
Has platform
Playstation 3 +  and PC +