“Oh, I've been looking for this copy of Grognak the Barbarian everywhere. Aside from the cool articles on loin cloths and axes, it's got some great tips on weapon care!”— Fallout 76 Vault Dweller's Survival Guide p.101

Grognak the Barbarian is a perk magazine in Fallout 76.

Reading an issue of Grognak the Barbarian will temporarily give the player character a unique bonus, such as increased melee damage or increased carry weight. All bonuses expire after 30 minutes (60 minutes with Curator), and the magazine is consumed once read.

Issues of Grognak the Barbarian are affected by Pannapictagraphist and will emit directional audio when the player character is in range. 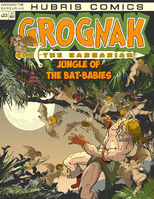 #4 In the Bosom of the Corsair Queen

#8 Lost in The Snows of Lust 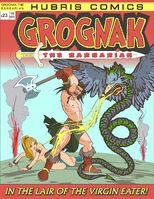 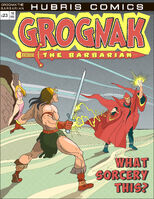 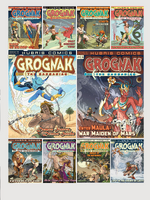 Clean versions from The Art of Fallout 4
Français Русский
Community content is available under CC-BY-SA unless otherwise noted.
Advertisement