Grognak & the Ruby Ruins is a Pip-Boy game tape in Fallout 76. It was published by Hubris Comics Game Studio in 2063.

Selectable as a playable game on the Pip-Boy 2000 Mark VI, in the Inventory tab. The game is a turn-based RPG drawing influence from classic CRPG games such as The Bard's Tale, Ultima, and Wasteland. The player starts in a tavern where they create their party, then sets off into the world in a conquest to defeat Grelok, one of many villains in the Grognak the Barbarian comics. The player's progress is saved on the holotape. The game can be played on both the Pip-Boy and terminals.

There are three bosses, which have the most HP compared to other enemies, while their average damage dealt is 35.

The only other mention made of Grelok by Hubris Comics is in the text-based Reign of Grelok. 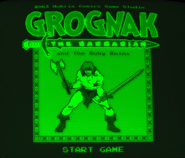 The tape at Grafton Dam, in a pipe below the catwalk