Grognak's axe is a melee weapon in Fallout 76.

A reproduction of the axe wielded by Grognak the Barbarian, one of The Unstoppables, in his eponymous comic book series. Hubris Comics also released collectable designs, such as the replica "Grog-Na-Rok Battle Damage" axe.[1]

The Stanley Cup trophy skin was created by Connor McCampbell after the idea was suggested by Jonathan Rush.

Wielded by a deathclaw 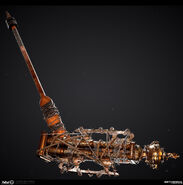