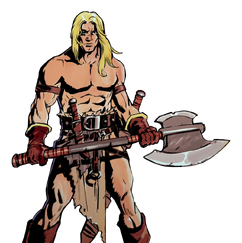 The forces of good

Grognak is a fictional character created by Hubris Comics Publishing. He is a barbarian warrior who travels through ancient lands, battling various fantastical monsters and villains, such as the villain Grelok. He is typically depicted wearing a simple green waistcloth with brown boots and gloves and wielding a mystical battle axe.

Although he is largely mortal, he has died but was later resurrected,[1] and has been susceptible to possession by unearthly forces.[2]

In addition to his own series, he appeared regularly as a member of The Unstoppables, a superhero team made up of other Hubris Comics legends such as the Silver Shroud and Manta Man. Grognak appeared as a playable character in Don't Be Bored Games Company's Unstoppables ShiNdig.

An outfit in Fallout 76's Atomic Shop implies that at some point during the franchise, Grognak becomes king.

Grognak is mentioned only in Fallout 3, Fallout: New Vegas, Fallout 4 and Fallout 76.

Grognak seems to be based on Robert E. Howard's fantasy character Conan the Barbarian. 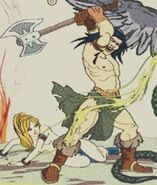 Fallout 4 appearance in the same issue, In the Lair of the Virgin Eater

With the rest of the UnStoppables 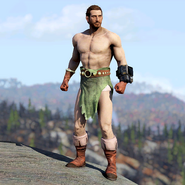 The wearable costume, as seen in the Atomic Shop 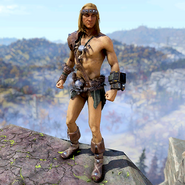 The King Grognak costume, as seen in the Atomic Shop
Add an image to this gallery

Retrieved from "https://fallout.fandom.com/wiki/Grognak?oldid=3297089"
Community content is available under CC-BY-SA unless otherwise noted.