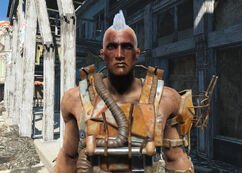 Gristle is a raider boss in Concord in 2287.

Gristle is one of Jared's top lieutenants. His boss is the leader of a raider gang headquartered in Lexington's old Corvega assembly plant. After receiving intelligence on a group of settlers lead by the Minutemen, Preston Garvey, passing through the area, Jared sent Gristle and his raiders to Concord to ambush the group as they passed through town. His primary objective is to kidnap Mama Murphy, one of the settlers in Preston's group, in order to gain her far-seeing powers.

His plan is foiled when the Sole Survivor arrives and kills him and his raiders, donning a suit of power armor and a minigun. Eventually, his boss's raider gang is taken out by the same person who saved Preston and his group of settlers in Concord.

He has his own terminal inside of the Corvega assembly plant where he briefly mentions that he really wants Preston's hat.

Gristle appears only in Fallout 4.

Retrieved from "https://fallout.fandom.com/wiki/Gristle?oldid=3143171"
Community content is available under CC-BY-SA unless otherwise noted.