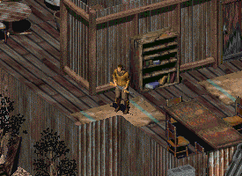 “I run the slaughterhouse in Modoc; you want something slaughtered, you bring it to me. I'll kill it for ya and make it into some of the best jerky you've ever tasted.”

Grisham is a butcher residing in Modoc in 2241.

Being the owner of Modoc's slaugtherhouse, Grisham is still very active at his old age.[1] Whatever a person needs to have butchered, he can turn it into jerky for them.

Depending on the Chosen One's Charisma, either Grisham's son or daughter can be persuaded to have sex with them. Immediately following, Grisham will burst into the room and catch the two in coitus, bringing up a dialogue window. With a high enough Intelligence, it can be claimed that they were performing a doctor's check-up, in which case they can then continue coming back for a quickie at any time without consequence. Lacking sufficient Intelligence, the only option is to admit that it's exactly what it looks like, and get a shotgun marriage to the NPC in question. At this point, the NPC will ceaselessly follow the Chosen One around as a companion, devoid of any useful skills. If Grisham's son or daughter dies or is sold into slavery, the Chosen One gains the Separated reputation, in which case they can then tell Grisham that his son/daughter is dead. After the discovery, Grisham dies from a heart attack.

Grisham appears only in Fallout 2.

Retrieved from "https://fallout.fandom.com/wiki/Grisham?oldid=3342519"
Community content is available under CC-BY-SA unless otherwise noted.