Killing a target in V.A.T.S., restores all AP upon exiting V.A.T.S.

Increased chance for kills in V.A.T.S. to restore all AP

Any kill in V.A.T.S. has an increasing chance to restore all Action Points.

Once discarded, gain an action for every enemy killed this turn 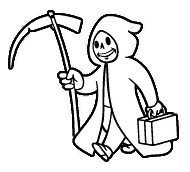 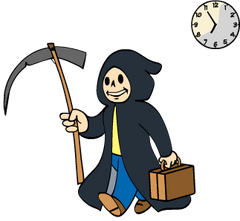 Grim Reaper's Sprint is a perk in Fallout 3, Fallout: New Vegas, Fallout 4, Fallout 76 and Fallout: The Board Game.

“If you kill a target while in V.A.T.S., all of your Action Points are restored upon exiting V.A.T.S.”— In-game description

Landing a killing blow in V.A.T.S. will immediately restore all Action Points, allowing the beginning of a new series of attacks immediately. However, foes killed by allies (or other means) will not trigger the perk, even while in V.A.T.S.

Be aware that the perk restores 20 Action Points if an enemy is killed in V.A.T.S., not per enemy killed; e.g. killing 3 weakened enemies in a single round of V.A.T.S. will only restore 20 AP, not 60.

“Death becomes you! Any kill in V.A.T.S. has a 15% chance to restore all Action Points.”— Rank 1 description

When fully maxed out, this perk can be incredibly useful in the mid to late game, particularly in large battles. This is because higher level enemies are often accompanied by lower level "cannon fodder" types, who can be instantly killed at higher levels. These enemies essentially provide a reasonably reliable source of regaining Action Points, since at higher levels they can usually be killed in one or two shots, with a 35% (at max level) chance of activating Grim Reaper's Sprint.

When Grim Reaper Sprint is discarded, the player character gets one additional action after each fight where they kill an enemy, until the end of their turn.

Grim Reaper's Sprint was a fan-created perk and winner of the Fallout 10th anniversary perk contest in 2007, submitted by Marc-Andre Deslongchamps. Bethesda implemented the perk in Fallout 3, describing the idea as "elegant and simple" while affecting game mechanics in a unique way.[1]