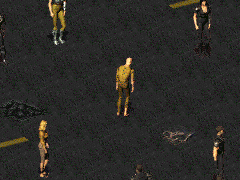 “I'm the Grim Reaper, you can't kill me. Aren't I funny.”— Grim Reaper

Grim Reaper is a notorious Internet spammer in 2241.

Grim Reaper's crimes have reached the ears of the Unwashed, and his days are numbered. When the Chosen One stumbles upon Grim, the Unwashed have already cornered him. The Unwashed proceed to execute him, as a symbol for trolls and vandals everywhere. The Unwashed take flight, and leave his corpse to rot under the desert sun.

The Grim Reaper has an XP stat of only 1.

Grim Reaper appears only in Fallout 2.

"Grim Reaper" is the name of a spammer that plagued the Interplay forums at the time of Fallout 2 development.

Retrieved from "https://fallout.fandom.com/wiki/Grim_Reaper?oldid=3073083"
Community content is available under CC-BY-SA unless otherwise noted.