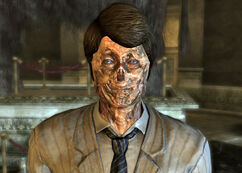 “Oh alright, alright. But if you start blabbing, I've got some buddies with itching trigger fingers...”

Griffon is a ghoul resident of the Underworld operating as a conman in the Museum of History in 2277.

Griffon is a huckster, a conman, a snake oil salesman. His current scheme is purchasing Aqua Pura, and stashing the water to sell to humans the Brotherhood isn't giving it to (raiders, slavers, Outcasts, etc.). He then puts regular irradiated water in the Aqua Pura bottles, and sells it to ghouls in Underworld as "Aqua Cura," claiming it reverses the ghoul condition. He wears a wig he found in the Museum Authority stock room, and for a ghoul, looks pretty healthy (just a coincidence, but helps make it seem like he's selling the real deal).[1]

Griffon appears only in the Fallout 3 add-on Broken Steel.

Retrieved from "https://fallout.fandom.com/wiki/Griffon?oldid=3443245"
Community content is available under CC-BY-SA unless otherwise noted.
... more about "Griffon"
RDF feed
Has platform
PC +, Playstation 3 +  and Xbox 360 +