Griffith Peak is an unmarked location in the Mojave Wasteland.

Griffith Peak is located southwest of Jacobstown, appearing on an early map of Fallout: New Vegas.[1] In-game, it is one of the many surrounding mountains, situated around the settlement of Jacobstown.

Despite not having a map marker, it can still be found as an editor ID in the GECK editor.

Griffith Peak is located in the same geographical area as the real world Griffith Peak, southeast of Mount Charleston, Nevada. 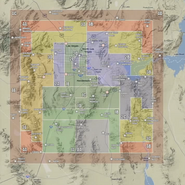