Grey Tortoise was a pre-War company that distributed its products in the states of Massachusetts and West Virginia.

Their cigarettes were spread throughout the Commonwealth and Appalachia as can be seen by their presence in old buildings and even in the vaults. Cartons were sold at all Red Rocket gas stations and multiple other stores. They are still used by the present-day inhabitants, and various companions will sometimes smoke one.

One of their billboards can be found in the Quincy ruins. It is next to a large two-story building to the north of the overhead highway. 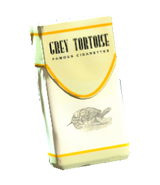 Preserved cigarette pack
Add an image to this gallery
Retrieved from "https://fallout.fandom.com/wiki/Grey_Tortoise?oldid=2906894"
Community content is available under CC-BY-SA unless otherwise noted.