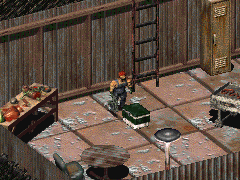 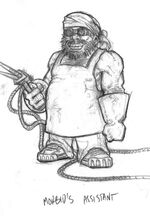 “Doc Morbid has the best human bodies around. None better.”

Gretch, a rather rotund dwarf, is Doc Morbid's assistant in Junktown's hospital in 2161.

Gretch works as a butcher in the basement of Doc Morbid's hospital. He assists in chopping up the human bodies that are sold to Iguana Bob as imitation iguana meat for iguana bits.

Gretch appears only in Fallout.

Retrieved from "https://fallout.fandom.com/wiki/Gretch?oldid=3419365"
Community content is available under CC-BY-SA unless otherwise noted.