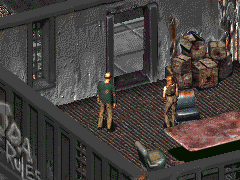 Greg is a junkie residing in a small building near the Blades' hangout in the Boneyard in 2161, alongside a female member of the Blades.

He is very jumpy and paranoid, and is clearly mentally unstable, believing that the Blades will soon be wiped out by an unknown group. He believes that when 'they' come to kill everyone, he will be the only one to survive due to the precautions he is taking. It is unknown if his paranoia is due to chems or if he is somehow aware of the Children of the Cathedral's attempt to take over the Boneyard and convert its inhabitants into super mutants.

Due to his severe paranoia Greg will exit conversation with the Vault Dweller after only a few lines of conversation and begin ranting at nobody in particular.

Greg appears only in Fallout.

Retrieved from "https://fallout.fandom.com/wiki/Greg_(Fallout)?oldid=3357288"
Community content is available under CC-BY-SA unless otherwise noted.