Fallout 3
“Hate to see what this place spits out if someone let the ventilation system chug along for a few years, we'd have another Greener Pastures on our hand, easy, and a pile of bodies beyond it.”— Dead Money terminal entry

The Greener Pastures disposal site is one of the largest radioactive areas in the Capital Wasteland. It is inhabited mainly by various mutated creatures including yao guai, radscorpions and radroaches. It is located northwest of the Temple of the Union, southwest of Old Olney and northeast of the MDPL-13 power station. It is also the location of a random encounter.

Greener Pastures was an infamous radioactive waste-disposal plant before the Great War. In reality, it was a dumping ground for all kinds of toxic waste, liberally stored in the open, without any containment or deactivation of the waste. It soon became one of the biggest environmental disasters in recorded history, incurring several casualties. It also became a frame of reference for potential future disasters.[1]

The disposal site is a vast barren landscape with puddles of radioactive nuclear waste. There is a building in the west and a broken down gate to the north. Across from the gate is a jack-knifed truck. To the south of the gate is a compartment filled with radioactive barrels. In the northeastern area is a shack which was once inhabited by a recluse.

The only interior this location has is what used to be the office and maintenance building on the western edge of the site. Inside you'll find two desks, one with a terminal to unlock the safe that lies in between the two desks. There are seven metal boxes, four lockers and a footlocker that can be looted. A workbench and tool cabinet are located in the corner on the left upon entering the building. The only threats here are radiation spots in the room and a couple of radroaches.

On the northeast side of the area is a makeshift shack (a container with a door on it) that still houses the remains of its previous occupant, the unique wasteland recluse, and contains:

On the western side of the area is the office with an Average locked terminal inside that opens a safe. The following items are also found in this building:

South of the main disposal area and office is a walk-in container nestled between an army truck and an orange and white truck that contains:

A few steps from the fast travel point is a random encounter. It is activated close to the second "Radiation warning" sign.

The Greener Pastures disposal site appears only in Fallout 3. It is also mentioned on a terminal in the Fallout: New Vegas add-on Dead Money.

On some occasions, the safe will not be locked at all. [verified] 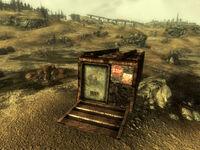 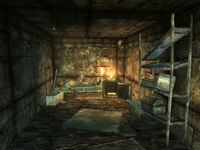