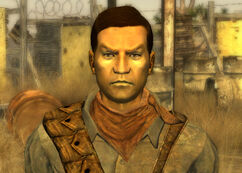 Comm Officer Green is the radio operator of Ranger station Echo in 2281.

Green is the disgruntled communications officer at Ranger station Echo, whose job is to "spy" on the Legion base, Cottonwood Cove. His frustration stems mostly from the fact that the higher ups in the NCR military do not want to attack it, considering it a waste of resources, and he finds it maddening to not attack an enemy that is right in front of them.

Return to Sender: Green is one of the officers you can give the upgrade codes to.

Retrieved from "https://fallout.fandom.com/wiki/Green_(Fallout:_New_Vegas)?oldid=3170469"
Community content is available under CC-BY-SA unless otherwise noted.