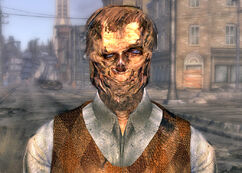 “No one trash-talks the eye.”

Grecks can be found in the north east of Freeside, and is easily recognized by his lazy eye. He has a history of gambling and drinking, and does not like to pay his debts. According to him, he got his lazy eye from an incident with a "scum-humping water baron."

Debt Collector: Grecks is one of the people that owes a debt to Francine Garret at the Atomic Wrangler casino.

If the player character chooses to make fun of his lazy eye, Grecks will get angry. If the player makes further derogatory comments, Grecks will turn hostile. Killing him will result in negative Karma and Freeside infamy. He can, however, be subdued by non-lethal means and upon regaining consciousness will once again be friendly.

Retrieved from "https://fallout.fandom.com/wiki/Grecks?oldid=3137858"
Community content is available under CC-BY-SA unless otherwise noted.