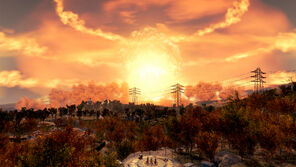 The Great War was a global nuclear event that took place on Saturday, October 23, 2077.[1] The attacks ended the Resource Wars, resulting in mass casualties, exposure to radiation and subsequent collapse of society.[2]

The event ended decade-long conflict between the United States and China.[3] By 2077, a combination of attrition, loss of supply routes, and offensives conducted by the United States across the front left Chinese units in Alaska stranded and cut off from reinforcements.[Non-canon 1] The liberation of Anchorage spearheaded by winterized T-51 power armor units under the command of General Constantine Chase marked the end of the Anchorage Reclamation.[4][5][Non-canon 1] After United States victory in Anchorage, the conflict transitioned into a stalemate.[6] Media outlets reported billions of dollars wasted with no clear end or victor in sight.[7] Preparing for a nuclear or biological attack, the president of the United States retreated to an oil rig off the west coast in March 2077.[8][Non-canon 2]

The war both began and ended on October 23, 2077.[9][Non-canon 3] Submarines were identified by COMPACFLT at 00:03 EST off the coast of California. At 03:37 EST, a squadron of high-altitude bombers were sighted off the Bering Strait.[10] Six hours later, at 09:13 EST, IONDS detected the first four missile launches and the United States moved to DEFCON 2.

Four minutes later, NORAD reported confirmed strikes. Unclear where the bombs came from or who initiated launch first, air raid sirens sounded, and at 09:26 EST, the president ordered a retaliatory strike according to scenario MX-CN91.[10][Non-canon 3] Nuclear bombs hit Pennsylvania and New York at 09:42 EST.[9] By 09:47 EST, facilities had gone offline.[10][11][12][13]

The nuclear exchange continued for two hours.[2] The Chinese stealth submarine Yangtze launched its missiles at the American east coast from the Boston waterway.[14] According to President Dick Richardson, the United States had prepared ahead of time, mitigating losses.[15] Las Vegas was spared a direct nuclear strike as Robert House had also prepared for the inevitability, disabling or destroying 68 out of the 77 warheads heading for the city.[16][17] A relative few were able to reach safety in underground vaults constructed by the Vault-Tec Corporation.[2] Some thought the warnings were another drill and did not report to their assigned vaults.[Non-canon 4]

Although emergency response units and elements of the National Guard were mobilized on the evening of October 22,[18] their ability to provide aid to victims and refugees was decreased by the lack of any centralized command and control, resulting from electromagnetic pulses which disabled communications equipment.[19] Despite efforts by the military to bolster relief efforts,[20] disarray and the onset of radiation sickness resulted in many deserting their posts.[21] Other first responders persisted, mobilizing to provide order and crisis relief.[22][23]

In the Fallout intro, the narrator states that "the storm of world war had come again." On the back of the Fallout Trilogy PC box, the war is called World War III. 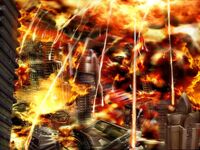 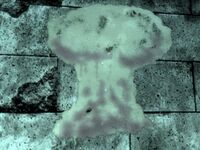 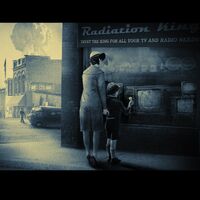