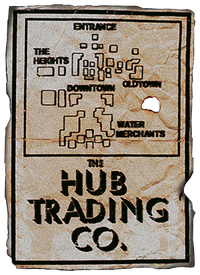 The Great Merchant Wars was a major conflict between several groups of merchants from the Hub that took place between 2126 and 2128 after Angus, founder and governor of the Hub, was murdered in the winter of 2125.

In 2126, a band of merchants seized the water tower in the Hub. They demanded anyone wanting water must pay a toll. The Great Merchant Wars began. The water merchants sealed up the town, but were outnumbered. A man named Roy Greene (Justin Greene's grandfather) made the peace and negotiated a settlement. The Hub's Central Council was formed, composed of two representatives from each of the Hub caravan companies. A long period of indecisiveness and meetings maintained the status quo in the Hub.

The Wars are mentioned only by Beth in Fallout. The Fallout Bible timeline (based on the original Fallout timeline by Brian Freyermuth) provides more detail about the events.

Retrieved from "https://fallout.fandom.com/wiki/Great_Merchant_Wars?oldid=937353"
Community content is available under CC-BY-SA unless otherwise noted.