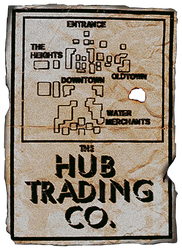 A map of the Hub

The Great Merchant Wars was a major armed conflict between competing merchant houses of the Hub. The political instability caused by the wars would lead to a major political reform that stabilized the situation within the city.[1]

The prelude to the Great Merchant Wars was the establishment of the office of governor in 2120. The first governor was Angus, its founder and architect of its success, who labored for 27 years to ensure its rise to prominence.[2] The concentration of power in the hands of a single man didn't do wonders for his life expectancy: Just five years later, in winter of 2125, he was murdered. The sudden vacancy at the top of the food chain threw the Hub into chaos.[3]

Seizing the opportunity, a group of unscrupulous water merchants seized Barstow's water tower, attempting to corner the market by force. Unsurprisingly, such a move was met with furious resistance, leading to the Great Merchant Wars. The merchants controlling the tower, though outnumbered, managed to fortify and effectively seal the town. As a result, the war raged on for the better part of three years, consuming lives and money. It was finally ended when Roy Greene, grandfather of future Sheriff Justin Greene, negotiated an agreement that put an end to the war.[4]

The settlement was a landmark reform, turning a primitive autocracy into an oligarchic city-state, ruled by a city council staffed by representatives from the three largest merchant companies (two from each, for a total of six representatives).[1] To avoid further disputes related to water prices and their gouging, a price cap was enacted.[5]