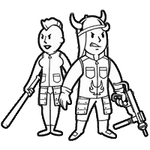 The Great Khans are a raider tribe in the Mojave Wasteland in 2281. They are the third incarnation of the Khans. The Great Khans are the only truly organized band of raiders in the Mojave and, as befits their warrior culture, men and women both can hold their own in a fight, whether in a brawl or a shootout. As a tribe however, the Great Khans are but a shadow of their former selves. Both their numbers and morale have been ravaged by a series of massacres and displacements. From their rocky stronghold at Red Rock Canyon, they make a living by drug-trafficking and the occasional raid or salvage find.

Main article: History of the Great Khans
“Though they have had a rough history, the legendary Great Khans are one of the longest-lived gangs to come out of the southwest.”— Loading screen
This section is transcluded from Khans. To change it, please edit the transcluded page.

The history of the Khans did not end with Darion's death. Though his mercenary war band was the governing band, it was not the only one. Over the next 25 years, the fragmented Khans gradually coalesced into a single group. No longer were they small raiding bands, this time the Khans became an unified, large tribe united under the leadership of Papa Khan, who led an exodus into the Mojave Wasteland, abandoning New California in 2267.[1][2] The Follower vanguard in the Mojave taught the Khans basic science skills, such as chemistry, reading and writing. They hoped that the Khans would use that knowledge to manufacture medicine. The attempt to civilize them failed, as the Khans turned to drug running instead.[3][4] Drugs were nothing new for the Khans, as they already knew how to use plants and herbs to create mind-altering substances. The Followers just made them more efficient and indirectly contributed to the popularity of substance abuse among the Khans.[5][6] Still, some of the chems they produce go toward trading with others, namely the Fiends[7] and Westside addicts,[8] for supplies that the tribe needs.[9]

With their martial prowess and know-how provided by the Followers, the Great Khans were the single most organized tribe in the wasteland and effectively its rulers.[2] However, their hegemony would not last long. When Robert House detected NCR scouts at the dam, he moved to claim New Vegas, end the tribal conflicts, and establish his rule. He offered the tribes their own Casinos to operate under his aegis. He gave the tribes that declared loyalty to him (the Mojave Boot-Riders, the Mojave's cannibals and the Slither Kin) weapons, ammunition, medicine, and other necessities to allow them to push back the Khans.[10] With House's aid, the three tribes drove the Khans out of the northern Mojave, forcing them to settle at Bitter Springs.[11][2]

Instead, the Great Khans began to attack the New California Republic, raiding their caravans, towns, and camps, as they seemed easy pickings for years.[12] Things changed in 2278. After the First Battle of Hoover Dam and the defeat of the Legion and the Brotherhood, the NCR stood virtually unopposed. Great Khan raids continued on, but it was the abduction and killing of four NCR soldiers that tipped the scale. The NCR decided to cut off the head from the serpent and mounted an assault on Bitter Springs.[Non-game 1] In what would become known as the Bitter Springs Massacre, NCR military units ended up killing a large number of Great Khan non-combatants, including women, children, and the elderly, breaking the power of the raider clan, but also causing the Khans to become bitterly hostile.[13][14]

The surviving Great Khans were permitted by NCR military authorities to resettle at Red Rock Canyon without interference.[15] In an effort to create a source of income, the Khans established a drug lab in the desolate gorges. By 2281, drugs manufactured in this lab formed the basis of their economy, providing much needed basic living necessities unavailable in the inhospitable canyon, where there is no food, barely any water, and nothing of note.[16][Non-game 2] Unfortunately, this drug business has destroyed what good will they had among others, as the drugs made their way to dozens of villages west of Vegas,[17] thanks to their knowledge of the land, making it easy to make deliveries and escape the NCR's wrath. The Republic was unwilling to deal with the problem directly, as an assault on the Red Rock Canyon would be expensive in terms of both caps and men.[7] Remnants of Khan presence who remained outside the canyon waged a desperate guerrilla war against the Republic, further straining their supplies.[18][19]

Easy access to narcotics has also led to many Great Khans becoming addicts, trying to cope with the trauma of Bitter Springs through alcohol and hard drugs. Red Rock Canyon, already desolate before their arrival, became little more than a drug den filled with the stench of alcohol and drug fumes, where even the flies buzzing around are hopped up on one drug or another. The steady stream of narcotics turned dozens of villages out west into junkie dens, on top of the aforementioned fiends.[20][17]

Such an existence is understandably intolerable to many, most importantly Papa Khan himself, who longs to leave behind a strong legacy. This is why Caesar sent Frumentarius Karl to act as ambassador to the Khans under the guise of seeking great warriors[21] and in exchange for promises of land, wealth, and revenge against the NCR to secure their allegiance.[22] Papa Khan's hatred of the Republic caused him to agree to the alliance almost instantly.[23] The Khans would march to assist Caesar when the time came.[24] Karl has appeased Papa Khan's advisers with promises of holding positions of power within the Legion.[25][26] However, in reality, the Legion does not intend to keep any of the promises made.

Karl secretly despises the Great Khans, considering them to be unworthy of the Legion and sub-par warriors at that.[27] He fully expects that the Great Khans will have to be decimated first in order to bring them to heel.[28] The Khans remain oblivious, and they know of no alternative way to move forward. They are dying out and every day brings their enemies closer to launching a strike against them. The dream of becoming Caesar's elite cohorts is tempting, to the point that the Khans are blind to the reality of absorption by the Legion.[Non-game 2]

The Great Khans reside in Mongolian-style tents called Gers (yurts) within Red Rock Canyon. However, unlike the other settlers of the Mojave, these homes are used for little more than sleeping in, as they usually only have room for a couple of beds and a central fire. A Great Khan often carries all of their possessions with them, if they should decide to have anything besides the bare essentials. Because of this, as well as their aggression, the other factions view them as savages. However, unlike the Jackals, Fiends, Scorpions and Vipers, the Great Khans are not hostile towards newcomers. If the Great Khans begin to dislike someone, however, they will often show great hostility.

The Great Khans subsist mainly on hunting and farming, and profit from the sales of chemicals and drugs produced in the Red Rock drug lab. In the 2270s, the Followers of the Apocalypse taught the Great Khans reading, writing and basic science in hopes that would create medical supplies, but the efforts backfired.[3] Instead, the Khans began to produce chems in the Red Rock drug lab. The canyon is a harsh environment for plants, however, leading to the Great Khans' dependence on drugs, which they can create quite easily and can sell to a multitude of factions. Coincidentally, one of their most frequent consumers is also their largest enemy, the New California Republic. The NCR officially has a ban on illegal drugs; however, the Crimson Caravan and wealthy merchants that make up the NCR frequently turn a blind eye in order to make a profit. While these merchants make up a large portion of their custom, their biggest consumer is, by far, the Fiends, violent raiders constantly searching for new and exciting drugs. However, the drug trade is not their only form of self-sufficiency. They constantly hunt geckos and bighorns for their meat and pelts, which are tanned into the leather outfits they wear. The Great Khans also wear crude armor plating on their legs, meaning they either have a loose grasp on basic mining and forging, or more likely that they use decorated and charred bones from the animals they hunt.

The Great Khans' preferred form of warfare is through war parties, where multiple central figures lead their own individual units into individual battles, and adapt on the fly, rather than being ordered by a main unit.

The Great Khans usually keep to themselves, rarely traveling too far from Red Rock Canyon, besides the odd raiding party or trek into Fiend territory, for fear of being spotted and hunted down by NCR patrols. They frequently visit the Fiends and other tribes or organizations dependent on their drugs.[20] The Great Khans are also hosting the arrival of an emissary of Caesar's Legion, Karl, and are working on forming an alliance with them in the prospect of taking the fight to their mutual enemy and aggressor, the NCR.

Besides these groups, they are quite isolated and hostile to many factions. They remain suspicious of strangers, because of their memory of what happened to them at Bitter Springs, although they are always ready to accept a newcomer and perform their brutal initiation rituals on them. They are unpredictable and brash and so should be treated with caution, as the wrong word will often set off a fuse in them. They are hostile against anyone wearing NCR apparel, including the Courier.

The Great Khans use a very random assortment of weapons throughout the Courier's involvement with them. While most Great Khans boast of their great strength, very few use melee weapons as their primary weapon, even though a large arena resides in the canyon, where multiple Khans hone their melee fighting abilities. At lower levels, the Great Khans use the 10mm and 9mm submachine guns, and at higher levels they use the hunting revolver, trail carbine and riot shotgun.

The Khans' primary source of revenue is drug production. Among many, they have managed to master the production of Jet. The quantities of brahmin dung used leaves a nasty smell in the drug lab.[17]

Some Great Khans are affected by the Sneering Imperialist perk. 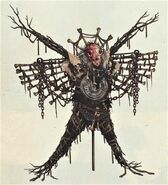 Retrieved from "https://fallout.fandom.com/wiki/Great_Khans?oldid=3476284"
Community content is available under CC-BY-SA unless otherwise noted.