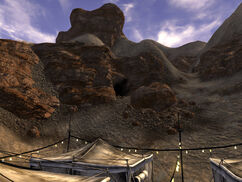 Climb Ev'ry Mountain
No, Not Much

“... We know he must be hiding out in one of the caves up in the mountains, but I don't have enough men to send out looking for him!”— Gilles

The Great Khan supply caves are three unmarked caves in the Mojave Wasteland in 2281, two of which are located almost directly north of Bitter Springs, with the third located to the northwest. The three caves are involved in two quests for Captain Gilles, namely Climb Ev'ry Mountain and No, Not Much.

This cave is found at the north edge of Bitter Springs, to the left of the path leading up into the mountains behind the camp. The cave is irradiated due to the radioactive waste barrels located inside. Giant ants inhabit the main chamber, with four giant soldier ants and three giant worker ants present. The radioactive supply cache is located at the back of the cave behind a broken fence.

This cave is north of Bitter Springs, at the end of the path which leads up into the mountains behind the camp. The cave consists of a large open room containing the bloody remains of kills made by the night stalker inhabitants, and a small passageway leading to an Easy locked gate, behind which are two ammunition boxes and a Great Khan supply cache. When the player character approaches the passageway to the supply cache, the night stalkers waiting there will rush out into the main cave area.

This cave is located to the northwest of Bitter Springs. From the bottom of the mountain path behind Bitter Springs, face west and head into the mountains. By staying close to the incline on the right, and climbing up whenever possible, the player character will come to a narrow path near the top of the mountain. The cave entrance is along this path, to the right. The cave is home to Oscar Velasco as part of the quest Climb Ev'ry Mountain. It contains a Great Khan supply cache and minor loot behind an Easy locked gate, just along the passage to the left of the entrance.