For the Republic, Part 2
Wild Card: Side Bets
Oh My Papa
Why Can't We Be Friends?

Fallout: New Vegas
“Maybe you could find something he wrote that expresses that opinion, or trick him into losing his cool in the longhouse right in front of Papa.”— Regis

The Great Khan longhouse is a location in the Mojave Wasteland, located in Red Rock Canyon, upon a mountain cliff and is home to Papa Khan.

The Great Khan longhouse consists of four rooms. The main room is where Papa Khan, Regis and Karl sit at a dining table. The first room to the right is Papa Khan's bedroom, and the door is secured with a Hard lock. Next to Papa Khan's room is Karl's room. The opposite side of the building to Karl's room is the kitchen, which contains various food items.

The Great Khan longhouse appears only in Fallout: New Vegas. 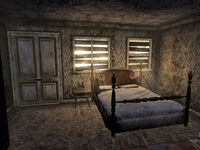 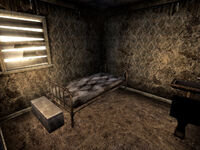