The Great Khan hideout is a location in the Mojave Wasteland, within the Boulder City ruins in 2281.

Jessup and another Great Khans member are hiding here from NCR troopers, who are led by Lieutenant Monroe. In the adjacent ruined building, two NCR troopers, Private Ackerman and Private Gilbert are being held hostage by the Khans.

The hideout appeared to have been a store before the First Battle of Hoover Dam, which destroyed the vast majority of Boulder City. A service counter with a cash register is at the forefront of the store with a broken display case containing minor items. In the back room, a few makeshift beds, ammunition boxes and broken shelving units can be found. The corpse of Khans member McMurphy is lying on one of the beds.

The Great Khan hideout appears only in Fallout: New Vegas. 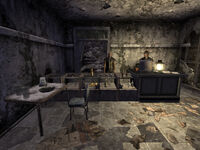