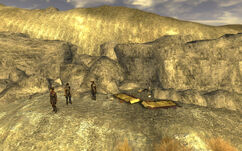 The Great Khan encampment is a location in the Mojave Wasteland. Located southeast of the makeshift Great Khan camp and west of Quarry Junction, it is used by the Great Khans to overlook the quarry.

Retrieved from "https://fallout.fandom.com/wiki/Great_Khan_encampment?oldid=3475740"
Community content is available under CC-BY-SA unless otherwise noted.