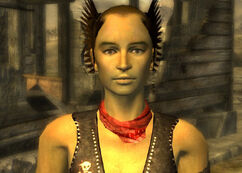 “They tell me I'm supposed to sell you weapons. Interested?”

The Great Khan armorer is a Great Khan living in the Mojave Wasteland in 2281.

She is located in the basement of a ruined house south-east of Red Rock Canyon.

Close to the Spring Mt. Ranch State Park, the building is a destroyed, wooden-framed house at the entrance to the canyon. Look for the brownish-yellow storm door covering stairs that go down to the basement.

The Great Khan armorer appears only in Fallout: New Vegas.

Retrieved from "https://fallout.fandom.com/wiki/Great_Khan_armorer?oldid=3145799"
Community content is available under CC-BY-SA unless otherwise noted.