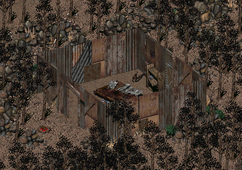 It is a small shack that sits on the path back to Klamath. It is a simple structure with one room and one entrance with no windows. A shelf is directly opposite the entrance against the back wall and simple bedding can be found in the middle of the room. The walls are bare and basic and the floor is little more than the dirt from outside and the only significant things in here are some notable loot. It is surrounded by trees and has a wooden pole standing outside the entrance.

The building was to play a role in a cut quest.

The grazing grounds shack appears only in Fallout 2.

Retrieved from "https://fallout.fandom.com/wiki/Grazing_grounds_shack?oldid=2327574"
Community content is available under CC-BY-SA unless otherwise noted.