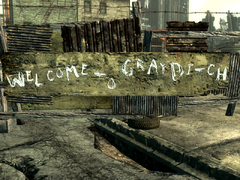 Grayditch is a neighborhood located on the outskirts of the Washington, D.C. ruins, south of the Super-Duper Mart in 2277. It was ravaged by "those monsters" according to Bryan Wilks, which are later revealed to be fire ants, in 2277.

Grayditch was a community on the outskirts of Washington, D.C. After more than 200 years of wasteland devastation and neglect, Grayditch was reduced to the home of two families and a scientist with a special scientific project.

Two families consisting of seven friendly humans in total inhabited the settlement, until a scientist going by the name of Doctor Lesko arrived. Dr. Lesko sought to genetically modify the giant ants that had been ravaging the wasteland back to their pre-War size; however, his experiments failed, and instead of shrinking the ants, he inadvertently gave them the ability to spew fire. The fire ants quickly infested the town and killed all but three of the town's residents. The only survivors were their creator, Dr. Lesko, a young boy named Bryan Wilks, and an unnamed fleeing resident.

Grayditch is a small suburban town, which consists mainly of ruined housing, a Dot's Diner, a Pulowski Preservation shelter, and the Marigold station.

Grayditch appears only in Fallout 3.