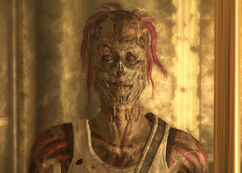 “I don't share the philosophy that Ghouls and Humans are different. We were all the same once.”

Nurse Graves is a ghoul who helps Doctor Barrows in Underworld.

Young by ghoul standards, Doctor Barrow's assistant Nurse Graves is knowledgeable and keen. She helps in Barrows's experiments to diagnose and treat the various brand-new ailments that ghouls are always complaining about. Happy with her lot in life, she spends her time cutting up corpses, inspecting brain tissue samples, and poking feral ghouls with a variety of (mainly sharp) implements.[1]

Apart from other ghouls in the Fallout universe, she sympathizes with humans as much as ghouls (stating they were all the same once) while most other ghouls and humans are on non-friendly terms. She will mention that Doctor Barrows performed experiments on Reilly while she was in her coma[2] and that he believes that if they can study the human body then they may be able to stop or even reverse the effect of human to ghoul transformations.[3]

Nurse Graves appears only in Fallout 3.

Her name "Graves" refers to burial graves, a reference to the Underworld's theme of death.

Retrieved from "https://fallout.fandom.com/wiki/Graves?oldid=3262432"
Community content is available under CC-BY-SA unless otherwise noted.