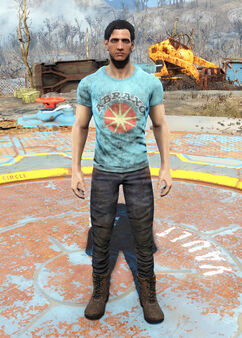 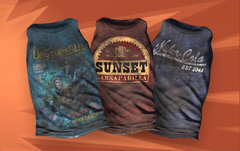 “Show off your Fallout branded attire with over 25 t-shirts and pants. Brands include Nuka-Cola, Red Rocket, Vault-Tec and several of your favorite Hubris Comics and more!”

Graphic t-shirts are a large collection of clothing that can be obtained in Fallout 4 Creation Club content "Graphic T-Shirt Pack."

Graphic t-shirts are comprised of a basic t-shirt with one of twenty four graphic designs alongside one of the multiple pairs of worn skinny jeans. These designs range from Nuka-Cola, Grognak the Barbarian, to even Sunset Sarsaparilla.

All variants have identical stats with the exception of their cap value. Graphic t-shirts grant a +2 Charisma bonus when worn. These outfits can only be worn with arm armor; they can have ballistic weave applied to them.

Suitcase with t-shirts and note at Skylanes Flight 1981

Suitcase with t-shirts with note at Fiddler's Green Trailer Estates

Wooden crate with t-shirts and note inside Hubris Comics

Add an image to this gallery
Retrieved from "https://fallout.fandom.com/wiki/Graphic_t-shirts?oldid=3137281"
Community content is available under CC-BY-SA unless otherwise noted.