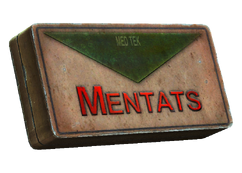 Grape Mentats are a consumable item featured in Fallout 4 that can be crafted or found by the Sole Survivor.

Grape Mentats are in a small tin that says Mentats on the front. Also said to taste like codeine. It brings out the user's talkative nature, allowing better prices for trading.

Retrieved from "https://fallout.fandom.com/wiki/Grape_Mentats_(Fallout_4)?oldid=2538177"
Community content is available under CC-BY-SA unless otherwise noted.