Sergeant Granite is a non-commissioned officer in charge of the Enclave Control Company squad assisting special agent Frank Horrigan in the field in Fallout 2.[1]

Granite commands the Enclave Control Company, a specialized unit usually assigned to perimeter defense.[2] By the time the Chosen One destroys the oil rig computer controlling the reactor and triggers a meltdown, they were deployed to assist Frank Horrigan in preventing the Arroyo tribal from reaching the tanker. Unlike the Agent, he and his crew can be convinced to assist the Chosen One in defeating Horrigan.

If Granite joins forces with the tribal, they join the escapees on board the tanker, watching the explosion in awe. Suggestive glances aside, they don't interact much with the Vault 13 and Arroyo folk, heading for Navarro upon reaching the mainland. They are never heard from again as the EC Company, but live a life full of adventure, enough to fill volumes of pulp sci-fi comics.[Non-canon 1]

Granite appears only in Fallout 2.

Granite offhandedly states "These are not the droids we are looking for." in one of his dialogue lines. This is an approximation of a line said by Imperial Stormtroopers in Star Wars Episode IV: A New Hope.

Granite and his squad 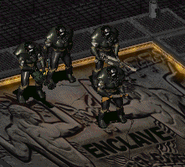 Chosen One wearing advanced power armor with Granite and the rest of Enclave Control Company.