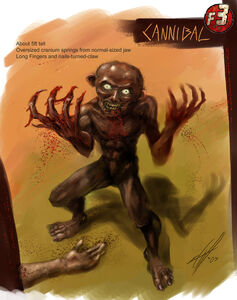 Concept art of the mutant cannibals found in the Grand Canyon

The Grand Canyon is a steep-sided canyon carved by the Colorado River in the United States in the state of Arizona.

Established as a national park in 1919, the Grand Canyon was a national landmark, a canyon stretching 277 miles long, 18 miles wide, and one mile deep. Before 2057, the park had an average of five million visitors per year. In 2057 by federal mandate, due to the uranium demand shortly before the Great War, the U.S. government removed the Grand Canyon's status as a national park and allowed private mining companies to exploit its supply of uranium beginning in May of 2057, with the park being closed indefinitely. The resulting mess was an environmental disaster. As a result, the canyon has become one of the deadliest places in the wasteland, home to hideous, cannibalistic mutants seen nowhere else. Sane people avoid it.[1][2]

The player character was supposed to enter the canyon to locate the remains of the second B.O.M.B. orbital station. On the way, they would encounter a handful of characters, including scavengers and Victor Presper's soldiers.[3][4]

Given the Grand Canyon's size, transportation over to the other side is difficult. As such, before the War, a sky tram was constructed allowing safe passage over to the other side. However, after the War, most of the mechanism was scavenged - the player character would then have the opportunity to locate the lost machinery (irreplaceable after the war) and restore the tram to full functionality.[5][6]

The Grand Canyon was to appear in the canceled Fallout 3 project Van Buren by Black Isle Studios.

The Grand Canyon is based on the National Park of the same name in Arizona.

Retrieved from "https://fallout.fandom.com/wiki/Grand_Canyon_(Van_Buren)?oldid=3480359"
Community content is available under CC-BY-SA unless otherwise noted.