“He's dead - nobody, no matter how tough, can survive a fall into the Grand Canyon!”— Antony when the Courier asks him about the Burned Man

The Grand Canyon, sometimes referred to as the Magnum Chasma within Caesar's Legion, is a steep-sided canyon carved by the Colorado River in the United States in the state of Arizona.[1]

Established as a national park in 1919, the Grand Canyon was a national landmark, a canyon stretching 277 miles long, 18 miles wide, and one mile deep. Before 2057, the park had an average of five million visitors per year. In 2057 by federal mandate, due to the uranium demand shortly before the Great War, the U.S. government removed the Grand Canyon's status as a national park and allowed private mining companies to exploit its supply of uranium beginning in May of 2057, with the park being closed indefinitely. The resulting mess was an environmental disaster. As a result, the canyon has become one of the deadliest places in the wasteland, home to hideous, cannibalistic mutants seen nowhere else. Sane people avoid it.[2][3]

The player character was supposed to enter the canyon to locate the remains of the second B.O.M.B. orbital station. On the way, they would encounter a handful of characters, including scavengers and Victor Presper's soldiers.[4][5]

Given the Grand Canyon's size, transportation over to the other side is difficult. As such, before the War, a sky tram was constructed allowing safe passage over to the other side. However, after the War, most of the mechanism was scavenged - the player character would then have the opportunity to locate the lost machinery (irreplaceable after the war) and restore the tram to full functionality.[6][7]

Just prior to the Great War, Fredrick Sinclair would choose a site close to the Grand Canyon to construct the Sierra Madre an entirely self-sufficient casino and resort largely away from civilization.

In 2247, the Blackfoot tribe, at war with seven other tribes in the canyon, captured Edward Sallow, Joshua Graham, and Calhoun, who was at the time working with the Followers of the Apocalypse. Edward taught the Blackfoots how to create weapons and properly wage war, and soon took over the tribe. He led the Blackfoots on an attack on the Ridgers' village, where he ordered them to surrender. When they refused, every man, woman, and child was killed. The Kaibabs were then surrounded by the Blackfoots, and were also asked to surrender. When they refused, a Kaibab envoy was directed to the Ridgers' village, and the Kaibab soon capitulated and joined up with the Blackfoots. The Fredonians followed suit, also joining the Blackfoots. The Blackfoots had soon conquered the region. It was after this that Edward crowned himself "Caesar" and Legion was born.

In 2277, Malpais Legate was covered in pitch, set alight and thrown into the canyon by Caesar, due to his failure to capture Hoover Dam during the First Battle of Hoover Dam. Making an example of the legate for the severe casualties sustained among the Legion forces during the battle, he was left for dead.

The Grand Canyon is mentioned in the song Two Left Hands, which plays on Appalachia Radio in Fallout 76.

The Grand Canyon appears only in Fallout: New Vegas, shown via intro slides in the add-ons Dead Money and Honest Hearts. It was also mentioned in Fallout 2 and Fallout 76, and was set to appear in the canceled Van Buren project by Black Isle.[8]

The Malpais Legate being thrown into the canyon 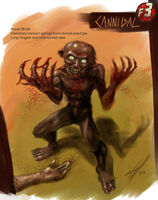 Grand Canyon mutant cannibal
Add an image to this gallery

Retrieved from "https://fallout.fandom.com/wiki/Grand_Canyon?oldid=3344444"
Community content is available under CC-BY-SA unless otherwise noted.