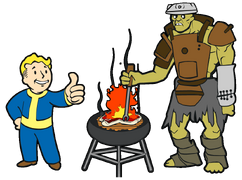 Event: Grahm's Meat-Cook is an event quest in the Fallout 76 add-on Nuclear Winter. This limited time event is only available from August 1-8, 2019.

When the Residents arrive at Grahm's cookout spot west of the moonshiner's shack, he will ask for their help in running the festivities. To celebrate Meat Week perfectly, the player characters must perform a number of tasks to keep up a meter displayed in the top right corner. The higher the meter, the better the rewards that are given at the end of the event.

To raise the meter, the player character can do several specific tasks in and around the cookout grounds:

Fulfilling the various task around the cookout grounds are integral to both raising the meter as well as maintaining it.

Additionally, if the player character has recently completed the event Primal Cuts, they can donate the rewarded prime meat in three batches of five, for a limit of fifteen for a reward of five Legendary scrip for a total of fifteen. Chally's feed can also be donated if it is crafted - there is a cooking station in the center of the campsite.