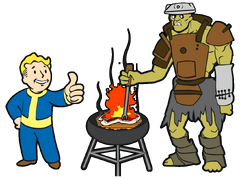 Event: Grahm's Meat-Cook is a seasonal public event in Fallout 76 introduced in the Nuclear Winter update.

When the Vault Dwellers arrive at Grahm's cookout spot west of the moonshiner's shack, still within viewing distance of Vault 76, he will ask for their help in running the festivities. To celebrate Meat Week perfectly, the player characters must perform a number of tasks to keep up a meter displayed in the top right corner. The higher the meter, the better the rewards that are given at the end of the event.

To raise the meter, the player character can do several specific tasks in and around the cookout grounds:

Fulfilling the various tasks around the cookout grounds are integral to both raising the meter as well as maintaining it. Player characters accustomed to the event can already be playing the drums or turning the cooking spits well before the event even starts to help complete it faster once the preparation objective is completed.

Additionally, if the player character has recently completed the event Primal Cuts, they can donate the rewarded prime meat in three batches of five, for a limit of fifteen for a reward of five legendary scrip for a total of fifteen by putting them in the larger Super Mutant cooking pot in the center of the area where Grahm holds the Meat-Cook or on the large open grills next to it (donating prime meat will also cause the player to experience an increasing degree of meat sweats). Chally's feed can also be donated if it is crafted - there is a cooking station in the center of the campsite, and Grahm will normally sell the recipe for it in his inventory as he can still be interacted with as a vendor during the event.

Once the timer runs out, or if the meter is completely maxed, the event will conclude. The event rewards are given depending on how high the meter is at the time of completion.

If the meter is below the first objective, the event fails.

The meter may sometimes not display the correct value and appear lower than it actually is.[verified]

Add a photo to this gallery
Retrieved from "https://fallout.fandom.com/wiki/Grahm%27s_Meat-Cook?oldid=3497503"
Community content is available under CC-BY-SA unless otherwise noted.