Helps Allies
“Grahm and Chally the moo-moo's Fair Trades. We find you. You trade fair. Or die. Guaranteed.”

Grahm is a friendly super mutant merchant and chef living in Appalachia with his pack brahmin companion, Chally the moo-moo.

Little is known of Grahm's history prior to 2102, other than what minute information he offers in his dialogue. He mentions someone he refers to as "Smarty," whose advice guided Grahm into becoming a merchant.[1][2]

By 2102, Grahm would be one of, if not the only, remaining live humanoids that was both sapient and friendly towards humans in Appalachia. As Dwellers of Vault 76 re-entered the world and swept into Appalachia, Grahm found much enjoyment in trading with them.

Grahm travels with 'Chally the moo-moo' (rhymes with "alley") and considers trading to be a game with the brahmin.[3] He puts a great deal of personal responsibility into the overall wellbeing of Chally and will frequently engage in one-sided conversation with her on their travels.

A long time ago during a warm day, Grahm used to spend time with his friends and cook meat. Since then, he has felt alone, remembering the old days. Due to that, Grahm decided to cook meat again for his new friends he had made across Appalachia.[4] According to Grahm, the first Meat Week was on a sunny day that made the super mutant want to spend time outside and cook. Grahm began to have more and more of these "meat days" and wanted to come up with a name for them. Eventually, after tossing out "Meat Many Days," he decided on "Meat Week."[5]

Sometime after Reclamation Day, Grahm and Chally hosted their "Meat Week" event close to Vault 76, with an express invitation toward the Vault Dwellers. Here, Grahm would prepare a grand cookout, with Dwellers assisting him in his grilling, in exchange for various prizes he'd collected through trading in the past year.

As of 2103, Grahm has become acquainted with many of the newly-arrived people in Appalachia, such as Ayla and Sofia Daguerre.[6] He is fond of stopping by the new farms and settlements that have sprung up, likely due to the new business opportunities they bring.[7] His business is well-known around Appalachia, mostly for the novelty of a super mutant who sells goods, with even the scavengers of Emmett Mountain disposal site having heard of tales of the friendly super mutant trader.[8] Maul, another super mutant, also knows Grahm.[9]

Grahm is the only source of the following items:

The following items, which can be obtained by other means, are sold only by Grahm:

Grahm appears only in Fallout 76.

Quest designer Carl McKevitt contributed to the writing of Grahm's Meat Week dialogue, though he did not create the character.[11]

Grahm in the Ash Heap

Grahm in the Forest

Grahm at the Crater

Grahm after being downed 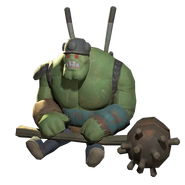