You'll Know It When It Happens
The House Always Wins VI
Wild Card: Finishing Touches
For the Republic, Part 2 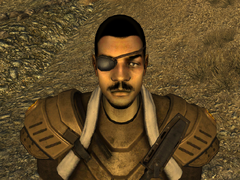 Graham Grant without his hat

“Quit goofing off and clear the channel. I'll be damned if the President dies on my watch because you were screwing around.”

Ranger Graham Grant[1] is an NCR Ranger coordinating security during President Kimball's visit and speech in 2281.

Grant is a long time NCR ranger, best described as the "shoot first, never ask questions" type of soldier, someone who doesn't mind going into combat, so long as his soldiers shoot alongside him. He was injured at one point, which may explain his aggressive nature. He also seems to enjoy (and even volunteer for) more dangerous missions.

Despite wearing his eyepatch on his right eye, he takes aim he uses that eye. This is due to the aiming animation being only for right-handed characters.