Grafton Steel is a location in the Toxic Valley region of Appalachia.

The steel mill was a contingent of Grafton Steel's greater Appalachia region.[1] During the Resource Wars, the company was officially named a government preferred war contractor, which resulted in more rigorous requirements for workers shift-wise to meet production quotas, including 6/72 work schedules, restrictions on breaks, and elimination of sick leave pay.[2] The company complied with the Wartime Workers Act, paying workers time and a half for the last two hours of their 12-hour mandated shifts.[2]

In addition, the employees of the steel mill were subject to dangerous working conditions.[3] In the first quarter of 2077, there were 123 cases of sickness, 12 dismemberments, and 31 deaths.[3][4] Fearing that this would compromise their government preferred status if released to the regulatory board, the data was altered.[4] With injuries and deaths increasing with each quarter, the company considered an increased push for automated workers, as repair costs would be less expensive than potential lawsuits.[4]

As discontentment increased among the workforce, production numbers decreased.[5] Steel mill administration suspected that the workers were actively damaging the automated machines that had been put in place.[6] They further stated that the human workers were not a tenable solution in light of the loss of productivity, mentioning upcoming delivery of additional automated workers.[6]

The steel mill is a large structure situated between Grafton Lake and Highway 61. that dominates the valley. The exterior is comprised of a silo and loading/unloading warehouses to the northwest and an armor workbench outside. At the southern end lies the Grafton Steel Yard, a claimable workshop.

The interior contains a smelter is to the northwest and includes a power armor station and another armor workbench on the ground floor. There is a blast furnace to the northeast. The upper level includes chambers with tinker's and weapons workbench. In addition, the rolling mill occupies the entire stretch of the southern part of the building and includes a chemistry station on the upper floor.

Grafton Steel appears only in Fallout 76.

Company truck parked at the mill

Rear door logo has been defaced to say "Grafton Steal"

Cooler containing the key to the blast furnace

The body of Henrick next to Henrick's note 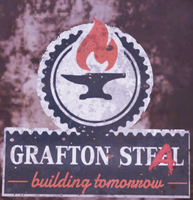