Ronald Laren
“If you're listening to this tape then my brains are splattered all over a wall somewhere and you've got a job to do.”— Grady's voice on holotape

Grady's Package is an unmarked quest in Fallout 3 which can be done alongside the quest "Those!", but its reward is found at Girdershade, most in line with the Nuka-Cola Challenge.

The quest may begin with finding the corpse of Grady, located inside Marigold station in the first mezzanine, though the quest can be completed without finding Grady's corpse, so long as one finds Grady's safe key inside the firehose case in the maintenance room or picks the lock on the safe.

Upon entering the Marigold station, follow the passage until reaching a large hall. There is a small manager's booth (A). Inside is Grady's skeleton next to a holotape, Grady's last recording, which explains how to find the package.

Downstairs from here, there are two tunnels next to each other on the east side. Follow the right one and open the first door on the right. If the quest Those! has not yet been completed, then the Lone Wanderer will encounter several fire ants on their way. In the first room, there is a door to a maintenance closet, which contains a firehose. Grady's safe key is inside the firehose box (B).

Continue through the passageway until once again reaching the main tunnels and take a left, then a right. In this next tunnel, turn left and head down the righthand side of the train. There will be a rotating light and an Easy locked door. One can lockpick the door or use the terminal. Inside the room is the safe (alongside other items such as a Ripper). The safe contains the naughty nightwear (C). 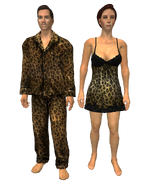 Once the naughty nightwear has been acquired, Lug-Nut will approach the Lone Wanderer and demand that they give it to him. He leaves with the nightwear if a speech check is not passed, but it is possible to kill him to get it back. If one chooses to give the nightwear to Lug-Nut and then loot it off his corpse after killing him, it will have been fully repaired. Alternatively, he can be mezzed before he takes it and the Lone Wanderer will get 250 caps when they return to Paradise Falls.

The reward for this quest is the naughty nightwear or, if it is returned Ronald Laren in Girdershade, he will reward the player character with 200 caps, or 300 if a Speech check is passed. Positive Karma is not gained if the Speech check is successful.