The Gourmands were a gang of raiders located in Appalachia.

The Gourmands originally were one of five raider gangs in Appalachia,[1] that had a reputation of being "freaks"[2] and "grisly and inhuman,"[3] likely because they were known to be cannibals.[4][5] They unsuccessfully tried to exchange human flesh for goods with raider vendor bots, which led them to utter a note specifically addressing this.[6]

After they split off from the other raiders and relocated to Bolton Greens,[7] gang members like Jerry started to go missing, while some of them became suspicious about their leader Morris Stevens.[8] The situation escalated when the gang was looking for another missing member named Gregory, and found his half-eaten corpse in Morris's room.[9] This behavior was a direct violation of the gang's code to never feast on one of their own.[9] The group then voted to exile both Morris and his wife Edie,[10] who moved to the wendigo cave,[11] where he subsequently ate her and became the "progenitor wendigo" not long after.[12]

The exact reason as to why the group vanished is unknown. And even though their code forbade them to do so, rumors are persistent that they ate each other to death.[13][14]

The Gourmands are mentioned only in Fallout 76. 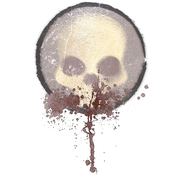