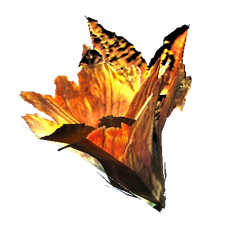 Gourd blossom is a consumable item featured in Fallout 4.

This plant is a common lower level consumable that is not too easily noticed. In Survival mode it can be used in crafting herbal stimulant and herbal antimicrobial at a chemistry station. For the Chemist perk, this item is treated as a chem, as the HP gained from consuming it will increase.

Retrieved from "https://fallout.fandom.com/wiki/Gourd_blossom_(Fallout_4)?oldid=3481651"
Community content is available under CC-BY-SA unless otherwise noted.