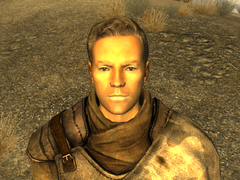 “I'm Lieutenant Gorobets, First Recon. If you're looking to collect a bounty, you should talk to Major Dhatri.”

Lieutenant Gorobets is an NCR Army officer in the 1st Recon stationed at Camp McCarran in 2281.

Descended from Ukrainian immigrants,[1] Gorobets is a competent NCR trooper in charge of 1st Recon Alpha Team deployed in the Mojave. He is a tough, charismatic leader and apparently, the only one in the team without a traumatizing experience under his belt.

Upon completing the Driver Nephi portion of the Three-Card Bounty quest by claiming Nephi's bounty, the entire 1st Recon moves to Camp Forlorn Hope to help with the Legion at Nelson. Gorobets can then be found inside the Camp Forlorn Hope command center.

Retrieved from "https://fallout.fandom.com/wiki/Gorobets?oldid=3499603"
Community content is available under CC-BY-SA unless otherwise noted.